Germinal (1885) is the thirteenth novel in Émile Zola’s twenty-volume series Les Rougon-Macquart. Often considered Zola’s masterpiece and one of the most significant novels in the French tradition, the novel – an uncompromisingly harsh and realistic story of a coalminers’ strike in northern France in the 1860s – has been published and translated in over one hundred countries as well as inspiring five film adaptations and two television productions. Étienne is portrayed as a hard-working idealist but also a naïve youth; Zola’s genetic theories come into play as Étienne is presumed to have inherited his Macquart ancestors’ traits of hot-headed impulsiveness and an addictive personality capable of exploding into rage under the influence of drink or strong passions. Zola keeps his theorizing in the background and Étienne’s motivations are much more natural as a result. He embraces socialist principles, reading large amounts of working class movement literature and fraternizing with Souvarine, a Russian anarchist and political émigré who has also come to Montsou to seek a living in the pits. Étienne’s simplistic understanding of socialist politics and their rousing effect on him are very reminiscent of the rebel Silvère in the first novel in the cycle, La Fortune des Rougon (1871). This edition was published in 1954 and reprinted in 1963 by Penguin for their Classics series. 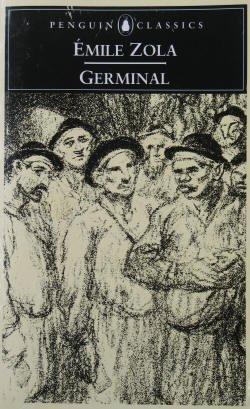